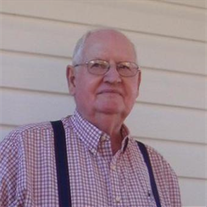 Funeral services will be held at 12:30 p.m. Thursday, October 12, 2017 at the First Christian Church in Greenville with Darryl Bolen officiating. Visitation will be held from 11:00 a.m. Thursday until service time at the church. Memorials may be made to the Bond Christian Service Camp Scholarship Fund.

The son of Henry Benjamin and Avis (Moulton) Roodhouse, Bennett, was born September 6, 1931 in White Hall, Illinois. He grew up in White Hall, attended the local schools and graduated from White Hall High School. Bennett joined the ROTC and went on to attend the University of Illinois studying Agriculture Sciences.

Continuing his military career, Bennett enlisted in the United States Army during the end of the Korean War. He served from 1953-1955 and was honorably discharged in 1955. Following his military service, Bennett was employed with the Soil Conservation Service, he was a Fieldman for the University of Illinois, and he was then self-employed for 40 years as a farm consultant and tax accountant.

On August 30, 1952, Bennett and Mary Anne Campbell were united in marriage at her family’s home in White Hall. They have enjoyed 65 years together.

Mr. Roodhouse was preceded in death by his parents and sister, Dorothy Remington.