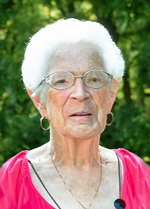 Carolyn Blankenship, age 81 of Keyesport, passed away at Helia Healthcare in Greenville on Thursday, October 5, 2017.

Carol was born on August 19, 1936, in Brownstown, Illinois, a daughter of Tom and Flossie (Kistler) Croster. She married Roger Blankenship on June 17, 1956, and they were later divorced.

She was preceded in death by her parents – Tom and Flossie Croster; a daughter-in-law – Karen Blankenship; a brother – Larry Croster; and a sister – Patsy Schultz.

Carol was a member of the Columbus Baptist Church. She never met a stranger, and because of her outgoing personality she had many friends. Carol worked as a waitress at many local restaurants, including Crossroads in Keyesport Ten Pin Bowling Alley in Carlyle. She also worked at B&M Seating in Carlyle. Carol’s hobbies included cooking, shopping and going to yard sales.

Memorial donations are suggested to Columbus Baptist Church and will be received at the funeral home. Online condolences may be sent to www.zierenfuneralhome.com.