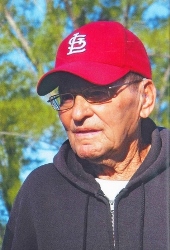 Don L. Taylor, age 91 of Carlyle, passed away at the Carlyle Healthcare Center on Sunday, October 29, 2017.

Mr. Taylor was born on February 8, 1926, in Augusta, Arkansas, a son of William J. and Elsie (Carter) Taylor. He married Freida Hazelrigg on September 10, 1949, in Batesville, Arkansas, and she survives in Carlyle.

He was preceded in death by his parents – William and Elsie Taylor Hester; a brother – William J. Taylor, Jr. and 2 sisters – Delois Nicholas and Wanda “Sis” Butler.

Mr. Taylor enlisted in the United States Navy at the age of 17. He served as a 5-inch gun loader on the aircraft carrier USS Hollandia and fought in 6 major battles in World War II including Okinawa, Iwo Jima, Guam, and Saipan. After his service in the Navy, Mr. Taylor enlisted in the Army Reserves and his reserve unit was activated during the Korean War. He retired from the Army Reserves after 33 years with the rank of Captain. He also served as the company commander of his reserve unit in Centralia.

Mr. Taylor graduated from Arkansas College in Batesville in 1956 and moved to Carlyle to pursue a career in teaching. He taught in the Carlyle School District from 1956 – 1985. Mr. Taylor also coached baseball, basketball, and track and field. Under his leadership, his baseball teams amassed a record of 289-69, and earned seven regional titles and one sectional championship. In 1994, Mr. Taylor was inducted into the Illinois Baseball Coaches Hall of Fame. During the summers, he managed the Carlyle City Pool and taught Driver’s Ed. Through teaching and coaching, he touched thousands of lives in Carlyle.

Mr. Taylor served 4 terms as an alderman in Carlyle, was Mayor Pro tempore for 2 years, and was elected as Mayor of Carlyle in 1984. In his one term as mayor, Carlyle flourished as he helped bring businesses such as Rail Bearing and Quip Industries, to town.

He and his wife loved to travel. They bought an RV and travelled all over the country, driving to every state but Hawaii. Mr. Taylor was a member of the First United Methodist Church in Carlyle and the Carlyle V.F.W. Post 3523.

Expressions of sympathy in memory of Mr. Taylor are suggested to the First United Methodist Church and they will be accepted at Zieren Funeral Home. Online condolences may be sent at www.zierenfuneralhome.com.