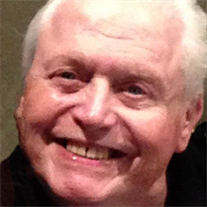 He was born on Friday, November 07, 1941, in Crystal City, MO, the son of Adam and Corinne (nee Wagner) Lalumondier.

Born at home in Crystal City, MO; he was reared there and attended Fulton Deaf School and graduated from Crystal City High School. He attended Ranken Technical College and worked as a machinist/tool & die maker. He worked for various companies in the Metro St. Louis area. He and his wife lived in Festus, MO, for over 40 years. They moved to Highland in 2008 and has been here ever since. He coached Little League baseball for many years, including his sons team since he was 7 years old. He played softball for 30 years. Their grandchilderen were the center of their life. Don and his wife enjoyed camping together [ A member of the “Moonshine Campers Club”]. He was also a good bowler (high game of 279).

Memorial contributions may be made to Activity Fund at Highland Health Care Center or to the Family for a charity to be selected .