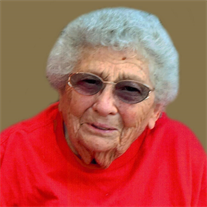 She was born September 27, 1926, in Highland, IL, the daughter of Benjamin and Irma (nee Lorenz) Gilomen.

She was a member of United Church of Christ of Marine. She was also a member of Woodmen of the World Camp #105 Highland, IL.

Eileen was born in Highland and grew up on South Poplar Street. She attended Highland School. She and her husband operated a grain and dairy farm on Deck’s Prairie, Northwest of Highland, over 40 years. They retired and moved to Grantfork in 1993. Eileen enjoyed cooking, spending time with her family, watching her grandsons bowl and watched every Cardinal Baseball game.

Funeral service will be at 10:00 AM on Monday, October 30, 2017, at Spengel-Boulanger Funeral Home in Highland, IL., with Rev. Philip H. Kershner officiating.

Memorial contributions may be made to Heartland Hospice.