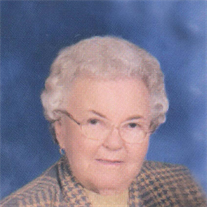 She was a member of Saint Paul Catholic Church and VFW 5694-Auxiliary, Highland, IL. She was a former member of Highland Women’s Club; Daughters of Isabella and St. Anne Altar Society.

Elaine was born and raised in Highland, IL. She graduated from St. Paul High School, Highland, IL, in 1942. She went to business school and worked for Endicott Johnson Company in St. Louis as a private Secretary, prior to having children. She played the piano at nursing homes for Masses and was an avid bridge player.

Funeral Mass will be at 10:00 AM on Saturday, October 14, 2017, at Saint Paul Catholic Church in Highland, IL, with Father Scott A. Snider, officiating.

Memorial contributions may be made to Highland Area Christian Service Ministry or Hospice of Southern Illinois.