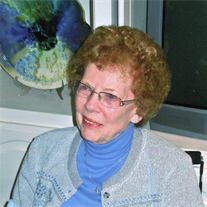 Ferne Nash age 93 of Greenville, passed away at her daughter Patricia Ramsey’s home in Casey where she had been lovingly cared for the past many months, at 10:45 a.m. Thursday, October 19, 2017.

Funeral services were held at 11:00 a.m. Monday October 23, 2017 with Rev. Kurt Simon officiating. Interment followed in Mt.Auburn Cemetery. For those who desire memorials in Ferne’s memory may be made to the Red Cross, Lincoln Land Hospice that assisted with her care, or the Greenville First Presbyterian Church, at the Donnell-Wiegand Funeral Home in Greenville.

Ferne McCracken, the daughter of Claire Pleasant McCracken and Sylvia Marie Price McCracken, was born on July 10, 1924 at the McCracken home near Reno, Illinois. Ferne grew up there and attended the Donnellson Grade School, Reno High School and graduated from Greenville High School in 1943.

Ferne and Charles A. Nash were united in marriage on March 1, 1947 at the home of her parents near Donnellson and they have enjoyed over 70 years together. Charles survives as do their two daughters: Linda Kay Weiss and husband Ronald of Lake City, Michigan, Patricia Ann Ramsay and husband William of Casey, Illinois, grandson Dr. Christopher Charles Weiss and his wife Stephanie of Lubbock, TX. and two great grandchildren: Aaron Scott Weiss and Lila Kay Weiss. Ferne is preceded in death by her parents Claire and Sylvia McCracken, and her brother Robert McCracken and his wife Grace.

Ferne attended Greenville College and taught grades 1-8 at the LaGrange One Room School and grades 1-4 at Reno Grade School. The family moved to Greenville and they raised their two girls here in Greenville. Ferne was a former member of the NCHA, National Campers and Hikers Association and she enjoyed camping with her family, Melrose Rebecca Lodge of Greenville, was a former Pink Lady at Utlaut Memorial Hospital for many years, formerly a member of the Reno Bethel Presbyterian Church, now a faithful member of her Church, the Greenville First Presbyterian Church.