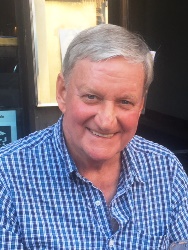 He graduated from Greenville High School and went 4 years to Monmouth College on a football scholarship. He owned Martin Insurance Agency for 35 years as well as being a founding director of the First National Bank of Mulberry Grove. His hobbies included being an avid golfer and hunting with his friends. He was also a member of the Greenville Country Club, an auxillary member of the VFW and a life long member of the St. Lawrence Catholic Church, participating as an altar/server boy. Since retirement, he spends time in Naples, FL with his son, ‘Lil Larry,’ daughter in law, LiAnne and granddaughter, Riley.

Larry was preceded in death by his parents; a brother, Arthur Joseph Martin, and a beloved nephew, Steilyn Gray Martin.