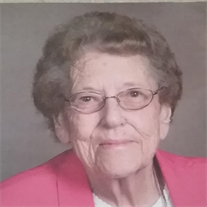 Funeral services will be held 10:30 a.m. Wednesday, October 25, 2017 at the Donnell – Wiegand Funeral Home in Greenville with Tyson Graber, officiating. Visitation will be held 4:00 – 7:00 p.m. Tuesday at the Donnell – Wiegand Funeral Home. Interment will follow in Salem Evangelical Cemetery north west of Alhambra, Illinois. Memorials may be made to the First Christian Church or Brown Cemetery.

Norma Marie, the daughter of August William and Louise Phoebe (Remmert) Schroeder, was born June 5, 1918 in St. Peter, Illinois. Norma grew up in St. Peter, moved to Farina at the age of 7 and attended the local school in Farina. She and her family moved to Granite City, Illinois in 1934 where she graduated from High School.

Norma and James Fred McEvers were united in marriage on July 3, 1937 in the St. John’s Evangelical Church. He passed away in 1962. She worked in the grocery store in Granite City as a clerk. They lived in Maryville, Illinois, California for a year and in 1948 moved to Bond County, Illinois. Norma worked on the farm with James and raised her family. She was a member of the Old Ripley Church of Christ, Pocahontas Senior’s Center, Shawnee Sewing Club, Domino Club, Bunco Club and the Smithboro Senior’s Center.

Norma is survived by two children: Richard J. McEvers and wife Michelle of Old Ripley, Illinois and Frances Zobrist and her husband Melvin of Pocahontas, Illinois. She is also survived by a step-daughter-in-law Carolyn McEvers.