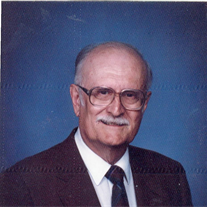 Graveside Services will be held at 10 a.m. Monday, October 9, 2017 in Montrose Cemetery with Rev. Mark Meyers officiating, with full Military Honors by the Untied States Army. Friends are welcome to join the family at Montrose. For those who desire memorials in Robert’s memory may be made to the First Presbyterian Church or to the Bond County Humane Society at the service or at the Donnell-Wiegand Funeral Home.

Robert Ward Wilson, who was born in Greenville on March 19, 1925 and was a lifelong resident, died in the early hours of August 14, 2017. Cause of death was complications after a fall sustained some months ago. He was one of the last surviving veterans of World War II in Bond County.

Wilson’s father was Glen B. Wilson, a prominent Greenville lawyer for over forty years. As a young man Glen rode horseback to a job as telegrapher at Grantfork, and was admitted to the Illinois bar after private law studies undertaken in his spare time while teaching chemistry at Greenville High School. Robert’s great-grandfather was Col. John B. Reid, who led Bond County’s 103rd Illinois infantry in the Civil War. A great-great-grandfather, Solomon Hinckley Mudge, managed the St. Charles Hotel in New Orleans and the Planters Hotel in St. Louis, and built Oakdale estate in Madison County. His great-great-great-grandfather, Rev. Enoch Mudge, the first ordained Methodist minister to be born in North America, built the Seaman’s Bethel in New Bedford, Massachusetts, and served as the model for Father Mapple in Melville’s “Moby-Dick”.

Robert Wilson attended Greenville College before being drafted into the US Army in 1943. He served in the Signal Corps as a photographer, following the Allied advance through Holland and Germany in 1945. He reached the Elbe River at Tangermunde, where he saw German refugees huddled on the opposite bank hoping to escape the Red Army. After V-E-Day he was sent to the Philippines where he photographed war-crimes sites for the International Tokyo Tribunal.

Post-war he studied accounting at Washington University, and became office manager at DeMoulin Bros. For some years after resigning he ran a photography business from the old family home at 415 Main Avenue. That art had always been his first love, and many of his black-and-white prints are masterpieces of technique and composition.

In 1947 Bob was married to Beverlee Anderson, whom he had met while stationed in Fargo, ND. They had three children: Robin (Fairbanks, Alaska), Glen (Würzburg, Germany) and David (Fairplay, Colorado), who all married and had nine children between them. All survive, as do 4 great-grandchildren, three of them living in The Netherlands where Glen moved to in 1971. That first marriage ended in divorce in 1972, and was followed by three others. Bob is survived by his beloved wife Marcia (Lieurance), whom he married in 2013. With his death the Wilson line in Greenville comes
to an end.

Robert Wilson was a member of the First United Methodist Church.