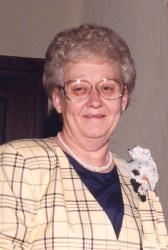 Mrs. Lawson was born July 13, 1927, in Woburn, IL, to the late Carroll J. & Bessie May (Hockert) Rule. She is a 1955 Graduate of Mulberry Grove High School in Mulberry Grove, IL. She married Arthur John Lawson on January 7, 1966 in Greenville, IL. He preceded in death on May 13, 2012. Mrs. Lawson had worked as a surger, at DeMoulin Garment Factory in Greenville, IL, for 29 years. She loved the St. Louis Cardinals and enjoyed embroidery.

Mrs. Lawson is survived by one son, Jim (wife, Kim) Lawson of Hillsboro, IL; two granddaughters, Mackenzie Lawson and Kaylee Lawson, both of Hillsboro, IL and one sister, Donna J. (husband Robert) Whalen of Greenville, IL. Along with her husband, Mrs. Lawson was preceded in death by one son in infancy, Gary Eugene Lawson; one sister and two brothers.

Memorials are suggested to Donor’s Choice.