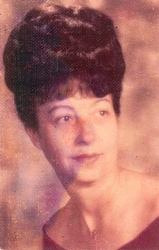 She was preceded in death by her parents and grandparents; a daughter – Melinda Sue Marine; and 2 step-fathers – Russell Fogler and Jules Marcy.

Mrs. Marine worked at Springfield Strike ‘N Spare Bowling Lanes East and West. She worked as a lane coordinator, assistant manager, and office manager for 22 years before her retirement in 1986. Eileen was a life member of the Disabled American Veterans Auxiliary, Chapter 15 in Springfield, and a member of the VFW Auxiliary Post 3523, Carlyle. Mrs. Marine loved to travel with her husband and family, and she also enjoyed bowling, fishing and boating, and spending time with her family and friends.

A graveside service will be held at 2:00 P.M. on Wednesday, November 29, 2017, at Camp Butler National Cemetery in Springfield, Illinois.

Memorial donations in memory of Mrs. Marine are suggested to Carlyle VFW Post 3523, and will be received at Zieren Funeral Home. Online condolences may be sent to www.zierenfuneralhome.com.