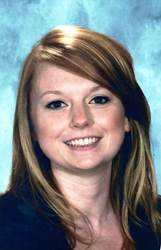 Elizabeth Elaine Westbrooks of Greenville, Illinois passed away unexpectedly, but peacefully and surrounded by those that loved her most, on November 15, 2017.

Funeral services will be held at 11:00 a.m. Wednesday, November 22, 2017 at the Greenville First United Methodist Church in Greenville with Rev. Curtis Flake officiating. Interment will follow in Kalmer Memorial Cemetery in Wateroo, Illinois. The family will receive friends from 4 until 8 p.m. Tuesday at the Greenville First United Methodist Church. For those who desire memorials in Liz’s memory may be made to The David Sheldrick Wildlife Trust USA, or to the Elizabeth Westbrooks Scholarship at the Missou Law School, either at the Church or at the Donnell-Wiegand Funeral Home.

Elizabeth “Liz” Westbrooks was born on November 17, 1984 in Greenville and spent all her formative years there.

After attending Greenville Elementary School and Bond County Community Unit #2 High School, Elizabeth went on to receive a Bachelor of Arts with Honors in English from Southern Illinois University of Edwardsville in 2007. She then attended law school and graduated from the University of Missouri in 2010.

Elizabeth was a respected attorney and earned the admiration of her colleagues through her hard work and dedication to her craft. She began her legal career at Bryan Cave, where she worked briefly in the eDiscovery Department. Following her time there, she was an Associate first at Boggs Avellino Lach & Boggs and later at Weidner & McAuliffe between 2011 and 2013. Her early career focus was as a litigator defending insurance companies. Elizabeth then returned to Bryan Cave to serve as a Conflicts Attorney from 2013 through 2016. While there, she excelled in identifying ethics issues and provided attorneys with solutions to resolve conflicts of interest related to new representations. In late 2016, Elizabeth joined Thompson Coburn as Loss Prevention Counsel, where she collaborated with the General Counsel and the Loss Prevention Partners to resolve potential and actual conflicts of interest related to both new representations and incoming firm employees.

Elizabeth is survived by her parents Hugh and Elaine of Greenville; brother Michael, his wife Ashley Sophia, and their kids Reid, Parker, and Delaney-Elizabeth of Honolulu, Hawaii; sister Ashley (West) and husband Dustin of Waterloo, Illinois; paternal grandparents Francis and Louise Westbrooks of Anna, Illinois; maternal grandparent Jean Thomas and the late Manly Thomas of Belleville, Illinois. She also leaves behind beloved aunts, uncles, cousins, and friends – all who will miss her dearly. Elizabeth is also survived by her devoted partner and future fiancé Christopher Sunzere.

Elizabeth registered to be an organ donor. Five organ recipients were given a second chance at life thanks to her generous and kind spirit. It was fitting that the procedure occurred on her birthday, as she was always looking to help others and would have been pleased to know she was able to give these precious gifts.

Elizabeth was a kind and loving individual who will be sorely missed by all. She felt especially passionate about wildlife conservation, for she always thought there to be no greater fulfillment than speaking out for those who cannot speak for themselves. She will not be forgotten, and her family and friends are taking steps to ensure that her legacy carries on by supporting the causes most important to her.

A scholarship for prospective/admitted women law students is being established in her honor at the University of Missouri-Columbia. Donations to The Elizabeth Westbrooks Memorial Scholarship Fund can be presented to the family at the visitation and/or funeral. Elizabeth also had a true passion for the conservation of elephants, and regularly advocated for and donated to the David Sheldrick Wildlife Trust (https://www.sheldrickwildlifetrust.org/asp/honordonate.asp). Donations in her name can be presented to the family at the visitation, funeral, or online via the website above. DSWT is in the process of setting up a formal fundraising page in Elizabeth’s honor. If donations are made online prior to the establishment of the formal fundraiser, please use elizabethwestbrooksdswt@outlook.com as the “Honoree” email address.

The visitation will take place November 21 from 4pm-8pm at The First United Methodist Church in Greenville, Illinois (310 South 2nd Street). Funeral services will also be held at First United – November 22 at 11am.