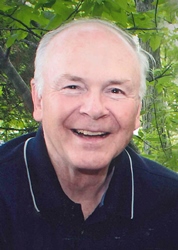 Mr. Rotert was born on July 1, 1944, in Kansas City, Missouri, a son of William E. and Marie (Bailey) Rotert. He married Bette Gilchrist in July of 1980 and she survives in Carlyle.

In addition to his wife Bette, Gary is also survived by a son – Allen Rotert and wife Pamela of Great Lakes, Illinois; 2 daughters – Katherine Kleiboeker and husband Max of Carlyle and Jennifer Lee Rotert; 4 grandchildren – Savannah and Mackenzie Kleiboeker, and William and Emma Rotert; and a brother – William Rotert and significant other Joanne of Kansas City, Kansas. He was preceded in death by his parents.

Mr. Rotert graduated from the University of Arkansas in 1966 and earned his PhD in organic chemistry from Washington University in 1973. Mr. Rotert was a brilliant scientist who worked as a radiochemist at various pharmaceutical companies spanning an impressive 40 years. He began working at Monsanto in St. Louis and most recently worked at Abbott Laboratories in Chicago for 25 years. Gary was proud of his research that proved that a particular chemical in children’s pajamas caused cancer. When he retired, he was working on a new cancer drug. Mr. Rotert loved his children and grandchildren, and enjoyed golfing and fishing. He was passionate about politics and loved playing bridge. He competed in the National Bridge Championships and was currently working on earning the title Grand Master.

Online condolences may be sent to the family at www.zierenfuneralhome.com.