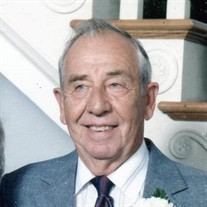 Funeral services will be held at 11:00 a.m. Tuesday November 28, 2017 at the Donnell-Wiegand Funeral Home in Greenville with Reverend Curtis Flake officiating. Masonic services will be held by Walshville now Donnellson Masonic Lodge # 255 A.F. & A.M. at 10:30 a.m. Tuesday. The family will receive friends at Donnell-Wiegand from 10 a.m. Tuesday until service time. For those who desire memorials in Mel’s memory may be made to the Bond County Home Health Department. Interment will follow in Maxey Cemetery with Full Military Honors by American Legion Post 1180 of Mulberry Grove.

Melvin Ellsworth Hamby, the son of Roy Leslie Hamby and Marie Ferrari Hamby, was born on August 5, 1921 on the Hamby Farm near Walshville, Illinois. Mel attended the one room country schools and early in life worked for the American Radiator company in Litchfield.

Mel answered his country’s call by joining the United States Army on September 14, 1942 at Scott Field, raising to the rank of Tec 5, serving with the HQ Company 111 serving overseas in the World War II, where marched across France three times, later was shot in the leg, then drove a truck. Mel was in battles including Naples, Foggie, Rome, Arno, Southern France, Rhineland and Central Europe being awarded medals including European African Middle Eastern Theater with 1 Silver Battle Star, 4 overseas service Bars, 1 service Stripe, the Good Conduct Medal and The Purple Heart Medal. Mel was honorably discharged on October 6, 1945 at Fort Sheridan. Mel returned home and worked construction out of the labor hall in Woodriver, then worked for A O Smith as a welder until his retirement. Mel then farmed for John Anthony, drove papers for the Greenville Advocate to Vandalia to be printed, and worked with Bob Fenton and Maurice Henderson doing many repairs and upkeep around the Greenville First United Methodist Church.

Melin and Norma Mae Steiner were united in marriage on October 3, 1954 in Pocahontas, and enjoyed over 58 years together before her death on July 4, 2013.

Mel is survived by his sister Patty Coke of Walshville, and a host of nieces and nephews. Mel is preceded in death by his parents, wife Norma, sister Betty Johns, and three brothers: Steven A. Hamby, John W. Hamby, and Clifford D. Hamby.

Mel was a member of the Walshville Masonic Lodge now merged with the Donnellson Masonic Lodge # 255 A.F. & A.M., and has been a faithful member of his Church, the Greenville First United Methodist Church.