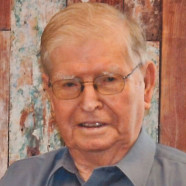 Mr. Gebke was born December 1, 1922 in Bartelso, a son of the late Bernard and Elizabeth, nee Becker, Gebke.

Larry retired as a dairy/poultry farmer and was the Road Commissioner for Germantown Twp. for 10 years. He was a member of St. Boniface Catholic Church in Germantown, Bartelso Knights of Columbus Council 4745, and the Clinton County Farm Bureau. He enjoyed playing cards, dancing, and watching Major League Baseball and the NFL.

Memorials may be made to St. Boniface Cemetery and will be received at the funeral home.