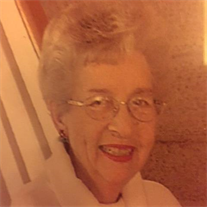 Mrs. Schwehr was born in East St. Louis, IL, April 20, 1922, a daughter of the late Frank O. and Dimple (Miller) Comer. She married Donovan William Schwehr on February 19, 1944. He was a two term councilman, then mayor for the city of Highland, IL. They moved to Medina in 1962 and she was employed by the Medina Central School District, as an assistant librarian and secretary, in the Towne Elementary School and the Medina High School, retiring in 1982. In 1982, she moved back to Highland, and in 1987 relocated to Houston, Texas. In 2002, she returned to Medina.

Mrs. Schwehr was a fifty year active member of Beta Sigma Phi International Sorority and the Sour Grapes social group. She enjoyed spending time with her family, camping and travelling.

Survivors include her sons, Rob D. (Angela) Schwehr, Raleigh, NC and Mike W. Schwehr, Houston, TX; 3 granddaughters, Andrea Schwehr of Columbia, SC, Laurel Schwehr of Austin, TX and Victoria Schwehr of Louisville, KY. She was predeceased by her husband, Donovan, on Nov. 15, 1980, her sister, Mignon Roberts, in 1981 and her daughter-in-law, Frances “Fran” Schwehr in 2013.

Friends may call on Wednesday (11-2:30) at the Cooper Funeral Home, 215 W. Center St., Medina, where her funeral service will be held at 2:30. The Rev. Michael Stephenson, pastor of the First Baptist Church of Medina, will officiate.

Memorials may be made to the Lee-Whedon Memorial Library.