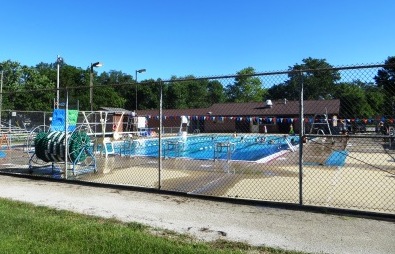 Although the total bid is over the estimate, work will progress at the Kingsbury Park District swimming pool.

Bids were opened October 25 and the park board met last week to review them. By a vote of 3 to 0, the board awarded the construction contract to Southwestern Construction of Highland. Tommy Simpson and Louanne Theiss were absent.

Park District Director Jerry Sauerwein reported Southwestern’s low bid was $792,578. There were a total of five bidders for the total project.

The board had previously entered into a contract with Chester Pools to install pool return pipes and a pool liner.

Sauerwein said the project will proceed, as planned. It will include a new building, a remodeled family changing area, and a splash pad.

The district obtained a $400,000 state grant and the board passed a bond issue to cover the local share of the project.

Sauerwein said the board will need more funds, but there will be ways to finance the work.

The district director said the original estimate was done in 2013 and the district applied for the grant the following year. The project was put on hold due the Illinois budget impasse, which held up use of grant funds. Sauerwein believes that delay led to higher costs.

Plans are for the work to be done before Memorial Day next year so the swimming season can be opened on time.