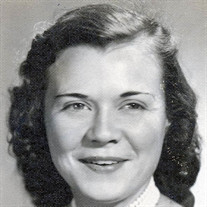 Agnes Rose Kimbro age 84 of Pocahontas, passed away at 5:38 p.m. Monday, December 11, 2017 at Greenville Nursing and Rehabilitation in Greenville.

Agnes and Alfred Jacob Kimbro were united in marriage on October 4, 1952 in Pocahontas, Arkansas and enjoyed over 40 years together before his death on April 6, 1993. Agnes is survived by their 4 children: Ramona (Richard) Ulmer, Rhonda (Joe) Rench, Robin (Bobby) Williams, Daniel J. Kimbro, 13 grandchildren, 34 great-grandchildren, 4 great-great-grandchildren, and her sister Margaret Doolen. Agnes is preceded in death by her parents, her husband Alfred, and brothers: William Arbgast Jr., Donald Arbgast, and sisters: Mary Busch, Pearl Salmons, and Patsy Handegan.