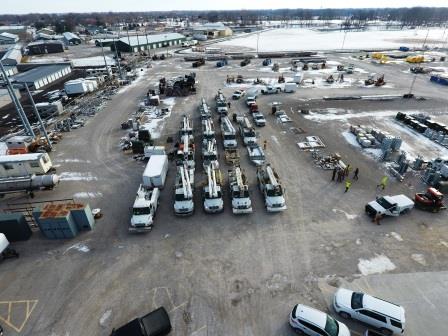 Ameren is participating in an industrywide effort to step up on-going power restoration and rebuilding efforts in Puerto Rico due to the catastrophic destruction of electric infrastructure following Hurricanes Irma and Marie. Ameren and other U.S. electric companies who are members of the Edison Electric Institute (EEI) will deploy additional restoration workers to Puerto Rico in January. Ameren is sending nearly 75 line workers and additional support personnel as part of this effort.

Beginning a 2,000-plus mile journey, equipment from Ameren, including trucks and trailers, is expected to roll out from St. Louis and Maryville, Illinois, as soon as later this week. The equipment will be headed first to Norfolk, Virginia, where it will be loaded on a barge along with supplies and resources from other utilities. Following the expected arrival of this restoration equipment in Puerto Rico in mid-January, Ameren is planning for its co-workers to be on the ground contributing to the relief effort shortly thereafter, as part of a contingent of 1,500 additional personnel arriving from the mainland. With this new wave, the total number of power restoration workers in Puerto Rico will increase to more than 5,500.

“Working side by side with our electric industry colleagues from all over the country, Ameren is committed to powering the quality of life for the people of Puerto Rico, just as we are for the communities we serve,” said Warner Baxter, chairman, president and CEO of Ameren Corporation. “While the challenges associated with the mission in Puerto Rico are unprecedented, our co-workers, who selflessly volunteered for this assignment, stand ready to safely tackle these challenges and accelerate the power restoration and rebuilding efforts for the citizens of Puerto Rico.”

Ray Wiesehan, Ameren’s vice president for corporate security and crisis management, said the island has been sectored into seven regions for purposes of the restoration. Ameren co-workers will work in the Carolina Region, located on the northeast coast immediately east of San Juan. Ameren personnel will work under the direction of incident management teams (IMTs) that were deployed to Puerto Rico Dec. 10 to support the Puerto Rico Electric Power Authority’s (PREPA’s) regional directors.

Working with PREPA, FEMA and the U.S. Army Corps of Engineers, the IMTs are focused on completing a full damage assessment of Puerto Rico’s energy grid to develop an updated and more closely coordinated restoration plan.

Since the request for mutual assistance was first received from PREPA in early November, EEI and its member companies, including Ameren, have been working in partnership with the American Public Power Association and the National Rural Electric Cooperative Association to supply technical expertise, materials, equipment, and resources to the island.

The deployment of additional crews represents the next phase in the mutual assistance response.

“Ameren will send crews for three weeks and rotate them, as needed, until completion of the work,” Wiesehan said. “It’s a difficult job, but our co-workers have the training and expertise to get the job done. Our focus, as always, will be working safely so we can restore power as efficiently as possible for the people of Puerto Rico.”