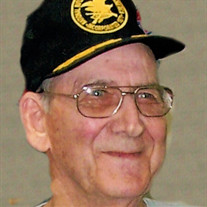 He was a member of NRA; former member-American Bowling League (Past Secretary).

Gus was born at Alhambra, IL; life long resident of Kaufman Station (rural Alhambra). He attended West School before engaging in farming at age 15 on his family farm. He worked for other farmers in the area, as well as hauling milk and delivering eggs. He entered the US Army, specialized in mechanics. He returned home in 1956 and continued farming. In 1961 he owned and operated Kaufman’s “66” Service Station at the junction of routes 4 and 140. Gus again returned to farming a few years later and had a few in-between jobs. He was then employed by Madison County Highway Department as a motor grader operator. He quit farming in 1979 when his mother passed away. The farmland was sold , but the centennial homestead and woods were divided between Gus and his siblings. In 1991 Gus retired from Madison County Highway Department. He was always a Cardinals Baseball Fan; he enjoyed country music; liked to BBQ ; anything outdoors was to his liking. bowling, gardening, horseshoes, fishing, mowing grass and his pet cats – Gus enjoyed them all.

Funeral service will be at 11:00 AM on Thursday, December 14, 2017, at Dauderman Mortuary in Alhambra, IL., with John Mindrup – Assistant Pastor, Salem United Church of Christ, Alhambra, IL, officiating.

Memorial contributions may be made to American Heart Association.