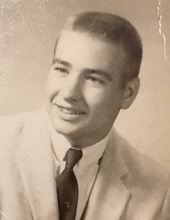 James R. Johnson, age 75, of Greenville, IL, passed away Sunday, December 3, 2017 at Helia Healthcare, Greenville, IL. Jim will be cremated per his wishes.

Jim was born on October 8, 1942 to Carl Wesley and Lillian Elaine (Anderson) Johnson. He married Juliana Ewing on July 30, 1977 in Springfield, IL. He is survived by his brother, Carl Robert (Bob) Johnson and wife, Carolyn of Greenville, IL.

Jim was born in Highland, IL, grew up in Greenville, and graduated Greenville High School. He worked at Fair Oaks Nursing Home as a nursing assistant until time of retirement. He also achieved the 15 year award from Fair Oaks. He was an avid sportsman – watching and participating. He was on a bowling team and liked to fish.
He was preceded in death by his parents.