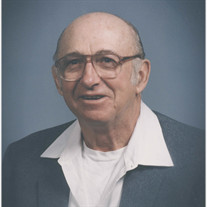 He was born February 08, 1930, in O’Fallon, IL, the son of Gustave and Frieda (nee Guttersohn) Bohnenstiehl.

He was a member of United Church of Christ of Marine. He was also a member of Labor Local #397; Marine Township Trustee (December 2011 to May 2017).

Orville was born in rural O’Fallon and grew up in Collinsville and Black Jack Areas. As a youth, he worked for a lumber company. He worked as a Bricklayer and Hod Carrier and Labored for many years for Local #397. He was the Superintendent on many jobs. He retired in 1992. He also farmed east of Marine with corn, hay and cattle. He enjoyed bowling for many years and bowling until age 78. He and his wife enjoyed dancing. He liked to go pheasant hunting in South Dakota, watching football games and Superbowl parties. He took very good care of wife, daughters and grandchildren.

Memorial service will be at 11:00 AM on Tuesday, December 19, 2017, at Spengel-Boulanger Funeral Home in Highland, IL., with Rev. Philip H. Kershner officiating.

Memorial contributions may be made to Marine Volunteer Fire Department or Mederi Home Health Service.