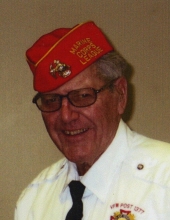 Vince E. Cruthis, age 94, of Greenville, IL passed away Wednesday, December 6, 2017 at Hillsboro Rehabilitation and Healthcare Center in Hillsboro, IL. Funeral services will be held Wednesday, December 13, 2017 with service time at 11 am at Young Funeral Home. Burial will be in Sunnyside Cemetery with military rites by Greenville V.F.W. Post #1377. Friends may call from 9 am to 11 am at the funeral home. Memorial contributions are suggested to the Greenville VFW Post 1377; Mulberry Grove American Legion Post 1180, and/or Lincoln Land Leathernecks Detachment 1174.

Vince was raised in Sorento, attended Sorento schools, and worked at a leather factory as an upper leather sorter. He joined the Marine Corps, served in WW 2 and while in the service went to school for communications and did telephone work. After being honorably discharged, he worked for South Western Bell until retirement. He farmed on the side and belonged to Greenville VFW Post 1377, Lincoln Land Leathernecks Detachment 1174, Greenville Masonic Lodge #245 AF & AM, Mulberry Grove American Legion Post 1180, and Bond County School Board. He was an avid outdoorsman. He liked to coon hunt, fish, trap, hunt, and raised exotic animals.

Preceded in death by his parents, three sisters: Glendola, Viola, and Vera; a daughter in law, Teresa Cruthis.