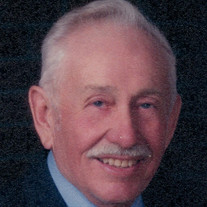 He was born June 15, 1927, in Edwardsville, IL, the son of Ferdinand and Clara (nee Mensching) Pfeiffer.

He was a member of Worden United Methodist Church.

Willard was born in rural Edwardsville, and was raised on the family farm. He continued to farm until 1973, when he went to work for Illinois Lumber for 7 years. He then started working for State of IL Dept. of Transportation Road Maintance until retiring in 2001. He and his wife owned and operated Pfeiffer Pickup Covers from 1986 till 2000. He served as Director for Farm & Home Administration for 2 years, Past President of Edwardsville Sportsman Club, was inducted into the Illinois Wildlife Federation Hall of Fame in 1996, served as District 7 Board of Education from 1964-1973, was instrumental in forming North East Central County Public Water District, and had donated blood to the Red Cross over 100 times.

Willard chose to gift his body to St. Louis School of Medicine to further medical research.

There will be no services for Willard G. Pfeiffer.

Memorial contributions may be made to Worden United Methodist Church.