She was born January 4, 1931 in Breese, a daughter of the late Frank and Laura, nee Usselmann, Hustedde. She married Henry “Hank” Peek on September 27, 1949 at St. Dominic Catholic Church in Breese and he died October 1, 2013.

In addition to her parents and husband, she was preceded in death by brothers, Robert, Joseph, and Francis Hustedde; father-in-law and mother-in-law, John and Theresia, nee Kampwerth, Peek; and brothers-in-law and sisters-in-law, Charles Boeckmann, Joseph and Martha Peek, August and Leona Peek, Sr. Teresta Peek, SSND, Cyril and Estelle Peek, Gerhard and Arlene Peek and John “Jack” Peek.

Mary Ann worked many years at Krebs Studio in Breese and later retired from Dillard’s in Fairview Heights. She was a member of St. Dominic Catholic Church in Breese and the Breese American Legion Post 252 Auxiliary.

Memorials may be made to St. Dominic Catholic Church or to Hannah’s Playground and will be received at the funeral home.

Expressions of sympathy may be sent to www.mossfuneralhome.com 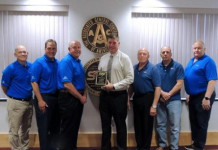