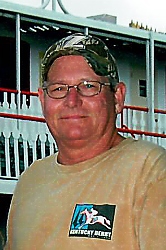 Mr. Mueller was self-employed as a carpenter. He previously worked for the Pacific Railroad in Missouri as a truck driver and crane operator. Mr. Mueller was a member of the Litchfield Moose Lodge #1634 and the North American Hunting Club. He enjoyed hunting, trout fishing, playing pool and camping at Lake Lou Yeager in Litchfield. He is survived by:

He was preceded in death by his father, Glen Mueller; 2 brothers, Dennis Mueller and Jim Mueller.

A Service of Remembrance will be held on Sat., Jan. 25, 2020 at 2:00 p.m. in Plummer Funeral Home in Litchfield. No visitation will be held. A luncheon and time for fellowship will follow the service at the Litchfield Moose Lodge #1634. The family suggests memorials to the family of Alan Mueller c/o Donna Odle. For more information, to light a candle or sign the online guestbook, please visit www.plummerfuneralservices.com.