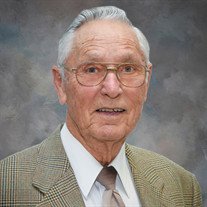 He was born and raised in St. Rose, IL and went to St. Rose School. He worked at the Jim Barth Farm, southeast of Highland, IL. He served in the U.S. Army; active duty during the Korean War, overseas in Korea from 1954 to 1955. He worked for Killion Trucking, Highland; later for Ready-Mix, Highland, for 40 years as a mixer truck driver and cement tanker truck driver. He helped on his father in-law’s farm, south of Highland, later purchasing the farm in 1965 and living there for many years. He farmed it until 2003, when he quit farming and moved into town. He enjoyed having breakfast at Hardee’s with his friends. He was very active with the Highland American Legion and VFW; also with their Military Honors Group.