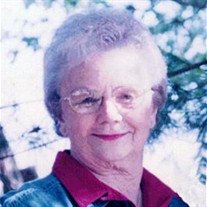 She was born on Wednesday, November 14, 1934, in Highland, IL, the daughter of Edward and Irene (nee Baer) Hoffmann.

She was a member of the United Church of Christ of Marine, Alhambra Homemakers; Becker-Reding Post #702, American Legion-Auxiliary, Marine, IL.

She was born in Highland, IL; attended St. Paul Catholic School. She worked at St. Joseph Hospital-Highland and for various Highland restaurants her parent’s owned. After marriage, for two years, she and her husband lived in New Jersey, Maryland and El Paso, TX, while he served in the US Army. They moved onto the farm with his parents, north of Marine and in 1969 they purchased the farm. She helped with the farm and was active with her children’s school activities, PTA and taught Sunday School. She was very active helping her husband with Woodmen of the World and with the American Legion. She was very active in her children’s lives and later in life, Mr. and Mrs. Buske’s family was their past time.

Funeral Service will be at 11:00 AM on Monday, January 06, 2020, at United Church of Christ of Marine in Marine, IL, with Rev. Phil Kershner, Pastor, officiating.

Memorial contributions may be made to United Church of Christ of Marine or St. Jude Children’s Research Hospital.