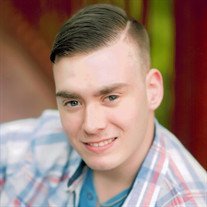 He was a member of the Highland High School “Hot Shot” Trap Shooting Team and “ATA” Amateur Trap Association.

Dylan was born in St., Louis, MO; he was a premature infant and spent three months in urgent care at Barnes-Jewish Hospital, in the Special Care Nursery unit. He grew up in Highland, IL and graduated from Highland High School in 2019. He enjoyed trap shooting at the Highland Pistol and Rifle Club, his grandfather Charlie got him interested in it. He was a member of the Highland High School Trap Shooting Team “Hot Shots”, receiving a Varsity Letter. He also enjoyed fishing. He was attending Southwestern Illinois College, Belleville, IL, in the Graphic Communications Program. He worked at KFC/Taco Bell in Highland for 2 years.

Funeral Service will be at 10:00 AM on Tuesday, January 28, 2020, at Evangelical United Church of Christ in Highland, IL, with Rev. Eric Quinney-Burnard, officiating.