The featured music act for this year’s Bond County Fourth Fest in Greenville has been announced.

Exile, one of the most successful country bands in the 1980s will headline the free entertainment lineup when Fourth Fest is held in downtown Greenville on Saturday, July 4.

Exile will perform at 8 p.m. on the Bradford National Bank stage.

Founded in the late 1960s, the band became well known when its song “Kiss You All Over” went to number one on the pop chart.

Beginning in 1983, the band became a huge country music act, eventually recording seven consecutive number ones. Exile has had 19 top 40 country songs with 10 of them becoming number one.

The current personnel lineup includes all of the members who performed during Exile’s success in the 1980s.

Among Exile’s big hits are “She’s A Miracle,” “Woke Up In Love,” “Give Me One More Chance,” and “Crazy For Your Love.”

Along with the Exile concert, there will be a fireworks show, carnival, food and other entertainment. More details on Fourth Fest will be announced soon. 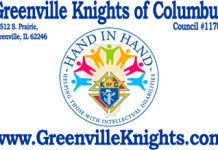