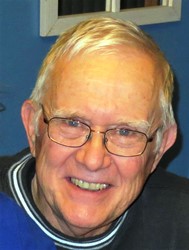 A Husband, Father, Brother, Teacher, and Friend left this world and passed into the next on Wednesday, January 8, 2020, at Barns-Jewish Hospital in St. Louis, MO, after suffering complications from a motorcycle accident on November 20, 2019, near Nashville, IL. Gerald (Jerry) Erwin Strotheide was born at St. Joseph’s Hospital in Breese on February 2, 1943, to Leona (Engelhardt) and Harold Strotheide. Before their passing, these two caring people raised him to know the importance of education, hard work, faith, family, and love. Jerry built his life on these foundations. Education was important to Jerry. At an early age, he began his career attending a two-room schoolhouse, Old Ford School, in Beaver Prairie. There he learned the basics: reading, writing, ‘rithmetic, and how to get up early enough to hitch a ride on the milk truck to watch cartoons at grandmother’s house. He continued his educational career at Old Breese High from 1957-1961. There he was an athlete and a scholar. There he met the love of his life, “the prettiest girl in school,” he always claimed, Judy Gammon. He later married her on February 22, 1964, in a very small wedding. In 1961, Jerry furthered his adventure into knowledge by attending college; however, in 1967 Uncle Sam decided he needed to study abroad, and he was sent to Vietnam. Upon returning he completed his degree in Mathematics in 1969 from Southern Illinois University Edwardsville. Along with this degree, Jerry decided to pick up a teaching certificate. He believed he would teach temporarily until he knew what he wanted to actually do with his degree. In 1969, Mr. Strotheide began his teaching career at Beckemeyer Jr. High School and Old Breese High teaching both math and science. As his “temporary” career progressed he became a Jr. High Science teacher at the Beckemeyer campus, ending his career at the Junior High campus in Breese. Toward the end of his career, he figured that he had taught three generations of one family. In 2003, when he retired, he was asked if he had finally decided on a permanent career, his answer was yes, retirement. Retirement was something Jerry had mastered. Whether it was enjoying coffee on the deck with his wife, Judy, while asking for words for his crossword puzzles; finding projects around the house or in his shed for he and his son, Jonathan (John), which often sparked philosophical debates; rescuing his daughter, Jenifer (Heimann), and then discussing great books and music, and then solving the world’s problems all over pancakes; having tea and cookies with his favorite granddaughter, Gretchen (Heimann), after their long walks and private talks; going for motorcycle rides with his son-in-law, Steve (Heimann), during warm days on winding roads to get a slice of pie, he was happy and content. Jerry loved a meal with his family. Whether it was “Taco Tuesday” with his brothers, William (Bill) and Clyde, or sitting down for a holiday meal with his five favorite people, either was equally important in his eyes. In honor of him, we ask, in lieu of flowers, that donations are made to Meals on Wheels. So, on Saturday, January 18, 2020, from 1-3 pm at Zieren Funeral Home, the public is welcome to share one more memory of a great man; then, at 3 pm a memorial service will begin honoring Gerald, a man who had a great life.