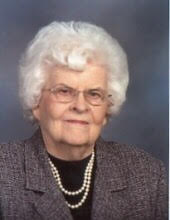 Funeral services will be held at 11 a.m. Wednesday, January 8, 2020 at the Donnell-Wiegand Funeral Home in Greenville with Dr. Rick McPeak officiating. The family will receive friends there from 9:30 a.m. Wednesday until service time. Interment will follow in Montrose Cemetery. For those who desire memorials in Gloria’s memory may be made to the St. Paul’s Free Methodist Church at the Donnell-Wiegand Funeral Home

Gloria Gene Graham, the daughter of William Moreland Graham and Gertrude Barry Graham, was born on September 9, 1924 in Greenville and delivered by Dr. K.B. Luzader. Gloria grew up in Greenville and attended the public schools here. The family moved to Winona Lake, IN in 1938 where she graduated from Warsaw High School. She attended Roberts Wesleyan College and then Spring Arbor Junior College, where she graduated in 1947.