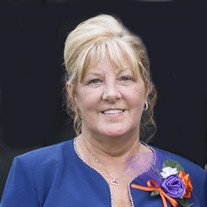 She was born on December 29, 1953, in Highland, IL, the daughter of Arnold and Drucilla (nee Pyle) Wilson.

She was a member of First Baptist Church.

Janet graduated from Highland High School in 1972. After graduating, she worked at several local businesses, including Basler Electric and Wicks Organ Company. She spent the majority of her career at the May Co. in St. Louis and United Stationers in Greenville.She enjoyed reading, racing, dancing, attending concerts, and all music. Her greatest joy was spending time with family, especially her grandchildren.

Memorial funeral services will be at 11:00 AM on Saturday, January 11, 2020, at Spengel-Boulanger Funeral Home in Highland, IL, with Rev. Rob Kirbach officiating.

Memorial contributions may be made to Janet’s Grandchldren’s Education Fund .