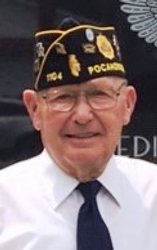 Maurice W. Haberer, 86, of Pocahontas, IL, died Wednesday, January 1, 2020, at St. Louis University Hospital, with his family by his side.

Maurice was born on May 27, 1933, to Harry and Sophia (nee Siever) Haberer, in Millersburg, Illinois. He began work at Shell Oil in 1952. On October 12 of that same year, he married Sally Schrumpf. In 1953 he was drafted by the US Army and deployed to Wurzburg, Germany where he served his country during the Korean Conflict as a military policeman for two years. While stationed in Germany they were able to spend time traveling to neighboring cities and countries, until he was honorably discharged. After the war, he went to work as a laborer until he retired in 1995.

Maurice and Sally Haberer were married 44 years until her passing on June 27, 1997.

In his free time, Maurice liked to hunt mushrooms, was an avid woodworker, tended a large garden, and enjoyed doing yard work. He could often be found working on some special wood working project for someone in his family. For more than 40 years he showed his love of country by putting flags out in Bond County on every military holiday. He made flag cases and would present them to deceased veterans’ families. Maurice loved his Pocahontas community, his church and spending time making wonderful memories with his family.

He was preceded in death by his parents; first wife, Sally Haberer; brothers, Norbert and Dale Haberer.