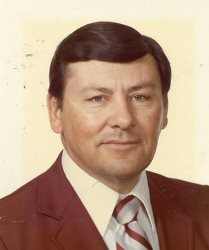 Don Sautman age 87 of Highland, formerly of Greenville and Carlyle, passed away at 2:49 p.m. Tuesday, February 18, 2020 at Alton Memorial Hospital.

Funeral Services will be held at 2 p.m. Monday, February 24, 2020 at the Donnell-Wiegand Funeral Home in Greenville, with Pastor Greg Morrison officiating. The family will receive friends from noon until service time on Monday. For those who desire memorials in Don’s memory may be made to the Wounded Warrior’s.

John Donald Sautman, the son of John Henry Sautman and Cecelia Etter Sautman, was born on May 15, 1932 north of Carlyle. He attended the St. Mary’s Catholic High School where he graduated in 1951. Don answered his country’s call by joining the United States Navy on January 9, 1952 in St. Louis and rose to the rank of IC3 serving aboard ships including the U.S. Navrecsta , and the USS Alfred A. Cunningham DD-772, serving overseas for 3 years, 3 months and 8 days. Don was honorably discharged on December 20, 1955 and was awarded the National Defense Service Medal, the Good Conduct Medal, the China Service Medal, the Korean Service Medal (2) and The United Nations Service Medal.

Don returned to civilian life where he worked for the Civil Service at Scott Field, then was promoted by the Army to Comptroller of AVSCON Army Aviation retiring in May of 1987. After retiring from civil service, he started a new division from the ground floor for a large defense contract (AEL) in Alton, Illinois. Don was a skilled craftsman, loved to fish, and enjoyed baseball. He played on the Washington Senators minor league team and was instrumental in starting the Bond County Little League. In retirement Don enjoyed golfing, traveling, and caring for his property.

Don is a member of the Greenville Country Club, a Korean Navy Veteran, the Greenville V.F.W. post 1377, the U S Alfred A. Cunningham, survivors, and the St. Lawrence Catholic Church.