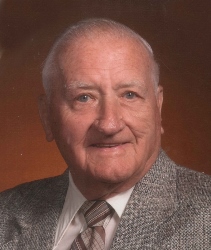 Maurice served in the United States Army during World War II and later went to work as a heavy equipment operator at Scott Air Force Base in Civil Service. Mr. Hustedde enjoyed wood working, gardening, and traveling. He was a member at St. Mary’s Church in Carlyle.

Expressions of sympathy in memory of Mr. Hustedde are suggested to the donor’s choice and will be received through Zieren Funeral Home, 1111 Clinton Street, Carlyle, IL 62231.