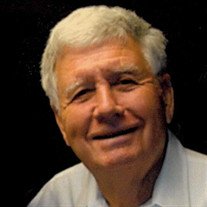 On November 05, 1960, he married Betty L. Oberdalhoff, who he refered to as his “Boopie”, at Alhambra, IL. She survives in Highland, IL.

He was a former Lions Club Member and member of #1535 Carpenters Union.

Bob was born in Livingston, IL and graduated Livingston High School in 1952. He joined the US Army during the Korean War and when he got home he attended Ranken Trade School, studying carpentry. He worked as a carpenter most of his life for many contractors in the area. He ran his own business of Robert Heinz Builder for 17 years doing mostly residential construction. Bob enjoyed oil painting, taking “Boopie”, his loving wife of 59 years, to dances and Polka dancing, trips to Tunica and the Ozarks, fishing, and working on projects in his shop. Family time was very important to him.

Funeral service will be at 10:00 AM on Wednesday, February 26, 2020, at Spengel-Boulanger Funeral Home in Highland, IL.

Memorial contributions may be made to Shriner’s Hospital or Siteman Cancer Center.