Members of the Greenville Comets basketball team were recognized Sunday afternoon during a special program.

The young Comets finished the season 12-18 overall and tied for third place in the South Central Conference with a 7-2 record.

Head Coach Todd Cantrill, who just finished his 22nd season as the leader of the program, was proud of his team as it improved throughout the season. 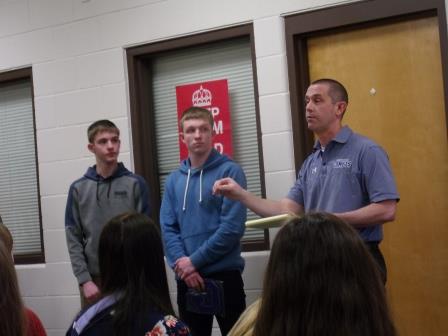 He commented that the season was almost more like two seasons. The year began with very little varsity experience and Isaac Green who broke his leg early on. He said by the end of the year, the improvement was evident.

Award recipients were Jack Schaufelberger as the leading free throw shooter and top rebounder, Peyton McCullough with the Hustle Award for most steals, Fletcher Manhart for the Offensive Award with a 10.8 point average and the Mr. Comet Award, Desmond Gardner with the Defensive Award, and Gabe Lager with the Most Improved Player Award.