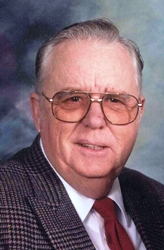 Edward Leo Monken peacefully went to be with his Lord on Monday, March 2, 2020, with his family by his side at St. Joseph’s Hospital in Breese.

Ed used to say that a stranger was just a friend he hadn’t yet met. Never at a loss for words, he would talk with anyone that would lend an ear…usually starting with “Have you heard this one?”

He was born the second youngest, and only boy, of J. Ellen (Stokes) and Edward Monken of Stolletown on June 28, 1932. At Lakeside Dance Hall he saw his future bride across the dance floor and told his friends he was going to marry her…and he did. On April 28, 1955, he wed Helen Wilken at St. Mary’s Church in Carlyle, Illinois.

Ed graduated valedictorian from St. James Trade School in Springfield, Illinois and holds the standing broad jump record. After helping his mother run their Stolletown General Store and Trucking Company, he managed the Shell Station in Breese on Old Rt. 50. In 1968, he opened Swift and Co. Fertilizer Plant in Stolletown and was the manager until his retirement in 1995. He was an active farmer and also raised cattle, hogs, rabbits, pheasants, and quail.

Ed was a founding member of the Wheatfield Township Fire Dept, and was involved with the V.F.W., American Legion, Knights of Columbus, IOOF, and the Farm Bureau. A proud Army veteran, Ed served in Korea and would tell the story of how his team was stopped on the way to the front and told to turn around, the war was over. Ed was a master storyteller and jokester, often playing harmless pranks on friends and family.

Mr. Monken also leaves behind his in-laws – Betty and Jeanette Wilken, Mary Reis, Lou Luebbers, and Clifford Dunn, as well as many nieces, nephews, and friends across the country. He was preceded in death by his parents and his son; and his siblings – Julia Ellen Head (Vic), Marjorie Springmeyer (Glenn), Virginia Brummond (Martin), and Rita Dunn; and his in-laws – Hank and Rose Wilken, Richard “Dick” Wilken, Trudy Luebbers, and Anthony and Bettye Wilken.

Expressions of sympathy in memory of Mr. Monken are suggested to the American Diabetes Association, the Alzheimer’s Association, or to St. Felicitas Cemetery Fund and will be received through Zieren Funeral Home.

Online condolences may be sent to the family by visiting www.zierenfuneralhome.com.