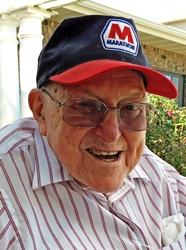 Gene was a life-long farmer, farming the land where he was born. He credited his 4-H involvement for fostering his farming knowledge. After retiring from farming, he tinkered with wood projects in the winter and tended garden in the summer, but he was still happiest on a tractor helping Alan. He was a life-long member of the St. Felicitas Catholic Church in Beaver Prairie where he was a trustee for many years. He enjoyed volunteering for church activities, especially calling bingo at the church picnics and seating people for the popular chicken dinners where he could talk to anyone.

A soldier drafted by the Army for the Korean Conflict, Gene spent most of his time in Trieste, Italy. Since he was ten years older than his fellow soldiers and already married, his nickname was “Pops.”

In lieu of flowers or other gifts, donations in his memory are suggested to St. Jude Children’s Hospitals, Boys Town, or to St. Felicitas Cemetery Fund and will be received through Zieren Funeral Home.

Online condolences may be shared with the family by visiting www.zierenfuneralhome.com.