The Greenville High School cheerleaders were honored Sunday afternoon for turning in the best season in school history, despite having many injuries during the campaign.

Coach Amanda Goldsboro said this was the first time the program had a junior varsity squad and it placed fourth in the Illinois Cheerleading Coaches Association state finals. 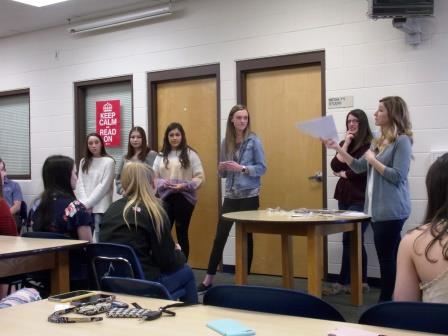 The varsity squad placed 8th at the ICCA finals, saving their best effort doe the Illinois High School Association state competition. The Comets tied for first in the sectional to advance to the state preliminaries in Bloomington.

They were in first place after the preliminaries, and finished fourth overall on the second day of competition.

Coach Goldsboro remembers that Friday when she saw her squad had received its outstanding score of 91.03. She said she, and the team, were so focused on doing well in the routine that they weren’t prepared for the actual score. The routine was the most they’d ever done. She said they learned a lot through the year.

Awards presented Sunday went to Trista Kinkel for the Comet Award, Emma Ketten with the Newcomer of the Year Award, Sophie Warchol with the Most Improved Award, Lexie Griffin with the Leadership Award, and Avery Cantrill with the Perseverance Award.