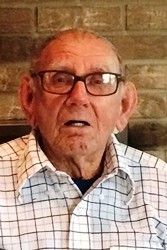 Harry D. Maroon, age 89, of Greenville, IL, passed away Tuesday, March 17, 2020 at Greenville Nursing and Rehab Center. Due to COVID-19 health concerns all services will be private. Memorial contributions are suggested to Mt. Auburn Cemetery.

She died August 23, 2019. He is survived by his daughters Vicki (Terry) Boatright of Carlyle, IL. and Rosetta (Larry) Blankenship of Greenville, IL, his sons Roger “Whitey” Maroon of Hoffman, IL and Randy “Ham” (Angela) Maroon of Donnellson, IL. He is also survived by his brothers Delbert (Ellie) Maroon of Altamont, IL and Sam (Janice) Sybert of Tennessee along with seven grandchildren and twelve great grandchildren. He was preceded in death by his wife, two sons Leslie Maroon and David Maroon, four brothers Eldon Maroon, Ralph Maroon, Alvin Maroon, and Robert “Sox” Maroon, and also a sister in infancy.

He grew up in Greenville and had worked for railroad early in his life. He spent most of his life working for Pet Milk in Greenville until he retired. He was known for his joking around. He like horseshoes, playing cards, and his beloved Cubs.