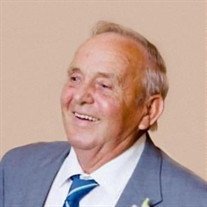 He was a member of First Baptist Church, Highland, IL.

Born and raised at Kittaning, PA. Moved to Granite City, IL, and began working at Granite City Steel. He then served with the US Army Air Corps with duty over seas at Lebanon. He returned home and began working at Granite City Steel and retired from there at age 60 as a forklift driver. After retirement he and his wife purchased property south of Pocahontas, IL, where they lived for many years. Also in their retirement they helped their son in the restaurant business. He was a big sports nut, loving the St. Louis Cardinals, Blues hockey and the St. Louis Rams football team. He enjoyed family, gardening, cooking and always made his family dinner when his wife worked midnights as a registered nurse.

Services will be at a later date.

Interment will be at Highland City Cemetery in Highland, IL, at a later date.

Memorial contributions may be made to St. Jude’s Children’s Hospital or First Baptist Church-Highland.