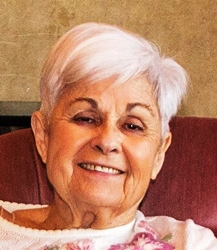 Janet A. Pisaneschi, 80, of Highland, IL, died Tuesday, March 24th, 2020, at Faith Countryside, with her husband by her side. Much of her family spent precious time with her during her final week.

Janet was a homemaker, who enjoyed spending time with her family, especially her eight grandchildren and two great-grandchildren. She was a member of the Highland First Congregational Church, where she was active in the Dorcas Fellowship and coordinated the white elephant sale for years. She was a long-time Meals on Wheels volunteer. Jan enjoyed playing bridge, taking day trips, and exercising with her friends, especially the water aerobics classes at the Korte Center. She loved to travel and especially enjoyed family vacations in Aruba. Jan was a brave survivor of breast cancer for many years and proudly participated in cancer drug trials at Siteman Cancer Center, knowing that she played a part in the fight for a cure.

She was preceded in death by her parents, Evan and Margaret Jones; sister, Nancy Morgan.

Memorials may be made to Highland Meals on Wheels

Funeral Service: At a later date