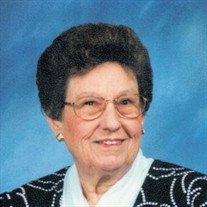 She was born on Monday, July 16, 1928, in Pierron, IL, the daughter of Martin and Bertha (nee Essenpreis) Keller.

She was a member of Immaculate Conception Catholic Church, Pierron, IL, St. Mary’s Altar Society of the church.

She was born at Pierron and grew up there. She attended Immaculate Conception School. She married in 1947 and raised her family. She also cleaned homes and briefly cooked and cleaned for local taverns. She also worked at Moutlon Bartly Shoe Factory and Basler Electric. Mrs. Pfister was a quilter, embroiderer, loved to cut grass, raise flowers and was well known for her homemade potato salad.

A Celebration of Life will be at a later date.

Private interment will be at Calvary Cemetery in Pierron, IL.

Memorial contributions may be made to Highland-Pierron Volunteer Fire Department/Masses/or Heartland Hospice.