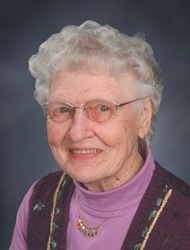 Selma Marie Wuebbels, 93, entered into the loving arms of God on Monday, March 23, 2020 in her home. Selma was the firstborn on July 19, 1926 to Eilzabeth (Gross) and Bernard Haake in Germantown, IL. She had two brothers who preceded her in death, Herman (Agatha Bustos) and Bernard (Smiley) (Mary Gramann). She has two living sisters, Marilyn (Ralph Holtmann) and Lorraine (Lavern Hemann).

Selma was a deeply spiritual person who started her adult life aspiring to be a nun with the Poor Handmaids of Jesus Christ. With her mother’s passing, she was needed back home to help raise her siblings. She worked at the shoe factory in Carlyle and was a homemaker.

An avid master quilter and a wonderful cook, she could make a pie with her eyes closed and whip up a meal in a heartbeat. No one left the house without a homemade cookie. Happy places were her kitchen and garden. She enjoyed watching birds and was fascinated by nature. With her amazing whistling ability, she could imitate many birds. Belonging to the Audubon Society, she put on numerous bird whistling performances.

Having a deep appreciation of music, she sang in St. Mary’s Church choir and in the Christmas Cantata for many years. She also was a Lector and Extra-Ordinary Minister for many years. She was an active member in the St. Ann’s Sodality and Knights of Columbus Auxiliary and helped by serving wherever she was needed. She also volunteered with Habitat for Humanity, the Red Cross and Camp Ondessonk . She also was an Associate of the Poor Handmaids of Jesus Christ for over 35 years.

The backdoor was always open for anyone who wanted to stop by to visit. Neighbors knew they were always welcome and loved. With a beautiful smile and an infectious giggle, everyone wanted to be near her. She had a sweet calming voice and a listening heart. Selma had a light hearted sense of humor and commonsense in the face of troubles. She was like a queen bee.

Selma practiced a gentle kindness by caring for many people with jars of jelly, pies made for funerals, meals when someone got sick, taking folks to doctor appointments, and cleaning peoples’ houses when they no longer could. She befriended people who needed a friend, volunteered in the nursing home, and took care of newborn foster children. Those times of caring for others spoke to all because when it came to loving your neighbor, Selma’s actions spoke louder than words.

May everyone who was touched by her love continue her legacy of genuine kindness, true gratitude, and courage in the face of adversity. Without a doubt she will continue to guide those she touched with her lasting love.

Due to the current effort to avoid the Coronavirus, her funeral will be private with a public Celebration of Life Memorial Mass to be announced at a later date. In lieu of flowers, donations can be sent in her name to the Poor Handmaids of Jesus Christ, P.O. Box 1, 9601 Union Rd., Donaldson IN 46513 or to Habitat For Humanity, 322 West Lamar St., Americus, Georgia 31709-3543 or you may honor her by helping someone like Selma did.

Online condolences may be shared with the family by visiting www.ZierenFuneralHome.com. Memorial donations will also be received through Zieren Funeral Home, PO Box 276, Carlyle, IL 62231.