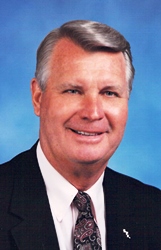 Simon Paul Kampwerth, Sr., age 82 of Carlyle, passed away on March 25, 2020. Simon was born in Bartelso, IL on August 30, 1937, son of the late Henry and Rose Mary (Rohr) Kampwerth. He married the love of his life, Barbara Trickey on February 27, 1960, and she survives in Carlyle. They recently celebrated their 60th wedding anniversary.

He was preceded in death by his parents; his brothers, Henry (Johanna) Kampwerth, Richard Kampwerth, Marcel (Christine) Kampwerth, and David (Mary) Kampwerth; and his in-laws, Scott and Catherine Trickey, Sr.

Due to the virus outbreak a Mass of Christian Burial will be held at a later date. Memorials are suggested to St. Mary’s Catholic Church or to Mater Dei High School. Memorial donations will also be received through Zieren Funeral Home, PO Box 276, Carlyle, IL 62231.