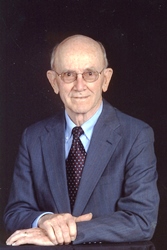 Stanley L. “Stan” Johnson, 91 of Mulberry Grove, IL, passed into the arms of his Heavenly Father on Tuesday, March 17th @ 9:00 am at the Greenville Nursing and Rehabilitation Center. All services will be private due to Covid-19 health concerns . Burial will be in McInturff Cemetery. Memorials may kindly be made to Mulberry Grove First Baptist Church or Mulberry Grove First Responders.

Born in Mulberry Grove, October 21, 1928, he was the beloved and “only” son of ten children born to Everett “Gris” and Gladys (Baldwin) Johnson. He married Melba “Nadine” (Bone) on October 14, 1950 at Mt. Zion Baptist Church in Vandalia, IL., having celebrated 69 years of marriage.

Stanley learned the value of hard work at a young age by helping his Dad work in the construction business after The Great Depression. Having graduated from Mulberry Grove High School, he went on to graduate from Greenville College, SIU-Carbondale, and then completed his schooling with a Specialist Degree in Business Education from SIU-Edwardsville.

Stanley was a veteran of the Korean War, having served in the US Army Intelligence Division, and honorably discharged in 1951. After the war, Stan continued his working career in education as a teacher, Principal, Superintendent, and then later becoming the Bond County Regional Superintendent of Schools. He then went on to serve as the Assistant Regional Superintendent of Bond, Fayette & Effingham County schools for the next twenty years. Upon his retirement from the school system, he then served as Bond County Probation Officer for the next five years.

Stanley was a lifetime, devoted member of the Mulberry Grove Baptist Church, serving in such positions as Sunday School Teacher, Sunday School Superintendent, Trustee, Deacon, and Chairman of Deacons.

In his spare time, Stanley was an avid outdoorsman who loved gardening, fishing, hunting and mushroom hunting, but his greatest love was the time he spent with his family and close friends.

Along with his parents, he was preceded in death by his sisters; Myrtle (Harold “Perky) Perkins, Mildred (Joe) Dugger, Letha (Murray) Bradley, Elva (Bobby) File, Nola (Ralph) Narup, Sue (Frank) Snell, and Rita Marie and Wilma Jean, who died in infancy; Father and Mother-in-law; Carroll & Ressie Bone, and, brother-in-law’s; Mendell, Donald and David Bone, all of Vandalia, IL. He is survived by one sister, Leola Wilfong of Mulberry Grove and numerous nieces and nephews.