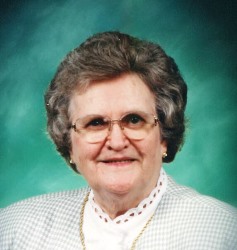 She was born July 20, 1926 in Germantown, a daughter of the late Frank and Anna, nee Deiters, Ortmann.

Virginia was a homemaker and farmer’s wife. She was a member of St. Dominic Catholic Church and Altar Sodality in Breese. She enjoyed quilting, puzzles, needlepoint, and embroidery.

All services will be private and interment will be in St. Dominic/St. Augustine Cemetery in Breese. A memorial mass will be held at a later date.

Memorials may be made to the Shriner’s Hospital for Children or the Clinton County Extension Foundation and will be received through Moss Funeral Home in Breese who is serving the family.